The (incomplete) Tenets of Architecture in the Tropics: Thresholds

Ever since visiting India with PAMSC, I have wanted to put this on paper – as a reminder to myself which I can share and build from. In India, I was reminded of the work of people such as Laurie Baker, Jane Drew (who worked with Le Corbusier in Chandigarh) and Maxwell Fry. These architects drew from their experience of building in India and published many books which have become prescribed reading for architecture in the tropics. Many of us were familiar with their books and lessons during our university education, but seem to have forgotten them in our actual built work.

In four consecutive articles under the broad headings of Shade, Permeability, Thresholds and Materiality – this is an attempt to refresh our collective memories. Hopefully, as we progress we will come up with more headings and examples. Many of the tenets deal with the climate, but they are the most effective when melded with aspects of local culture and lifestyle. In this article, we see the significance of the ‘threshold’ in tropical buildings.

The Cambridge Dictionary defines the ‘threshold’ as “the floor of an entrance to a building or room” while the Longman Dictionary has this definition – “the level at which something starts to happen or have an effect” and “at the beginning of a new and important event or development.” These common definitions regard the threshold as a separation or connection element located between different spaces. In architecture however, it takes on physical, psychological, emotional, social and cultural meanings.

In its first and simplest form, it represents the physical boundary between the inside and outside – as part of the door construction; with a hole in the centre for a shot bolt, with a physical divider to change from one floor material to another, or a step to emphasise the act of crossing over.

In local cultures, this is often where we take off our shoes to enter the house, crossing the public realm into the private. In the traditional Malay house, there is sometimes an earthen pot of water with a scoop for washing our feet before climbing the steps to the ‘anjung’ or entry verandah. It can be seen as part of a ritual to remind us that we are entering into another sanctum – that we should adjust our tone and temper our behaviour. More poetic than a door mat. Some believe that thresholds have protective powers against unwanted visitors.

Part of a ritual to remind us to adjust our tone and temper our behaviour.

And there is more to it – consider the door swinging into a room; whether the door opens into the room or facing the adjacent wall determines the level of privacy for the person inside the room. The door left ajar extends the function and meaning of the threshold. It maintains connectivity with the space and people outside the room while retaining a level of privacy – for naps on warm tropical afternoons when the door is left ajar for breezes to enter.

The door left ajar extends the function and meaning of the threshold.

The threshold as a planning element is more common than we think – the five-foot way is designed as a thoroughfare if one were to regard the entire street. But from the point of view of the individual shop, it is can be seen as a soft (and permeable) border between two realms – the street (public) and the shop (private). It can take on different functions depending on the time of the day and/or business. Often these devices are enlarged to suit the scale and type of the building it serves; becoming a forecourt which functions also as preparatory space for the task to come – allowing time for the visitor to prepare.

It is also written in ancient Chinese folklore that a high threshold (門檻)can prevent a zombie (僵尸) from entering the house. (Chinese Doorway) (Photo courtesy of Mary Leonard)

The 5-foot way can be seen as a soft and permeable border between two realms; the street and the shop. (Photo courtesy of Jerome Lim)

Successful thresholds for buildings in the tropics are the interstitial space between the outside and the inside, designed specifically for our climate – for the eyes to adjust to the light, for perspiration to evaporate slightly or to put away our umbrellas before entering the building. This can be in the form of a naturally ventilated lobby or a shaded verandah such as the ‘serambi’ of a Malay House.

Often these thresholds serve as spaces for social and communal activities – successful for this purpose because of their organic nature, they are less formal thus encouraging interaction. They give the notion of ‘colonising’ an auxiliary space to extend the meaning and function of the original space. This blurring of boundaries is an important aspect of tropical design as it allows a flexible interpretation of space depending on the time of day, the weather and the activity itself. It invites nature into the built environment.

Perhaps the designers of our public buildings need to adopt this manner of thinking more stringently, and to remember that the threshold between the inside and outside, between work and community, between heat and comfort, between public and private is NOT defined by 12mm of tempered glass. They must remember that its relationship with the street and the public will be enhanced by the quality of its threshold – it must be accessible to the public, it must say something about the space they are about to enter, and because we are in the tropics, it must have shade.

And this is the topic of our next conversation.

The tree court in the front of the Masjid is one of the thresholds between the street and the prayer hall – a quiet space and shade from the trees in preparation for prayer. (Masjid Wan Alwi).

Thresholds into public buildings can be used for social and community facilities. (Sibu Heritage Centre)

The street is invited into the building; making it a lobby, a forecourt, a thoroughfare and public space. (Hong Kong Shanghai Bank – photo courtesy of Fosters and Partners)

The (incomplete) Tenets of Architecture in the Tropics: Permeability
July 27, 2020

The (incomplete) Tenets of Architecture in the Tropics: Thresholds
June 24, 2020 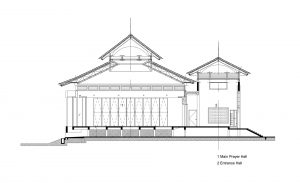 The (incomplete) Tenets of Architecture in the Tropics: Shade
June 11, 2020