The (incomplete) Tenets of Architecture in the Tropics: Shade

There are entire studies about the different types of roof forms and how they are shaped by different cultures, history and geography. In this short article, we are simply looking at them in relation to our work of designing in the tropics:

Penan Shelter: Even nomadic tribes have the roof as their built form. (Copyright: Andy Rain/Rainsurvival.)

The roof as a civic element

The most primitive structure is often a roof supported by several posts, or even trees. It is the single most important building element to keep the weather out. The importance of having a shaded space in the tropics is so important that it is able to elevate its’ function into a civic one such as the “wakaf.” There is a lesson to be learnt for the design of our own civic spaces which are often ceremonial and symbolic. There is no provision for shade, making them rather useless during the day.

Two successful examples of providing shade on a civic scale are Alvaro Siza’s Portugal Pavilion and Jurgen Mayer’s Metropol Parasol. They understand and celebrate the importance of shade in the public realm. Closer to home, Design Network Architects’ Masjid Wan Alwi borrow from the “wakaf” and the “serambi” to elevate the structure of the mosque while extending the prayer halls into the landscape; similar to that of a covered verandah and making it a more comfortable civic space.

The roof as a climatic element

Traditional house builders in the tropics understand the need to shade the occupants and the building itself. The roof eaves shield from the elements and protect the vertical surfaces of the wall, thus prolonging its lifespan. Recent developments with mono-pitch roofs are worrying – the roof fails to shade the building facade on the high side, thus increasing heat gain and deterioration of the building material. For the mono-pitch roof to work successfully, it has to extend far enough from the face of building, or if the building is a single-storey structure. The pitch or slope of the roof plays an important part in the cooling of the house as well as there must be enough pitch to afford a higher ceiling internally. The tall interior space would then promote better air circulation and comfort, which is much easier to achieve with a normal pitched roof compared to a flat (or flattish) mono pitch.

Wakat: This little raised platform with a pitched roof is both a civic and physical landmark. It is often used to demarcate the public realm in the kampong. (Copyright: Landscape Specialist Malaysia)

The design of the mosque alludes to the idea of the wakaf as a shared structure as well as a gift to the community. (Masjid Wan Alwi by Design Network Architects.)

The roof as a physical element

In true Modernist spirit, the building is often expressed as visually distinct elements – the floor slab, the supporting columns, the walls and the roof as clearly demonstrated in the Barcelona Pavilion. Interestingly, this idea works well for designing in the tropics – the elevation of the floor slab from the ground plane gives the opportunity to improve ventilation and reduce dampness while the separation of the roof from the top of the structure or wall allows a gap which can be used to dispel hot air from the interior. It allows the roof to express itself as a distinct feature of the building.

For the mono-pitch roof to work successfully it has to extend far enough from the face of building. (Rantau Panjang House by SML Architects)

The roof eaves are extended lower on the west facing side of this house. (1-tree House by Design Network Architects.)

Section through the Rantau Panjang House by SML Architects.

Centre for Earth by Kee Architect

I am fond of recent examples of this in the works of African architect Francis Kere; a true celebration of the roof without resorting to cultural or historical motifs and forms. The structure is expressed as part of the buildings’ aesthetic – often simple and light construction which perhaps reflects the economy and skills of its builders.  Closer to home, one may visit Razin Architect’s Suaru Nusa Idaman to see the same ideas at work.

It would be irresponsible to write an article about roofs without addressing the problem of leaks. I often tell my client that we want to design the roof with care, and build it with even more care and let it do its’ work over our heads, channelling rain away from the house.

And with luck, we can forget that the roof exists.

The (incomplete) Tenets of Architecture in the Tropics: Permeability
July 27, 2020

The (incomplete) Tenets of Architecture in the Tropics: Thresholds
June 24, 2020 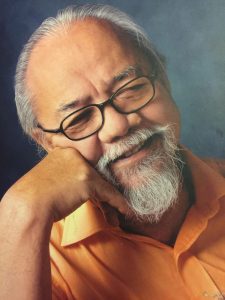 The (incomplete) Tenets of Architecture in the Tropics: Shade
June 11, 2020
Menu
© All Rights Reserved 2020